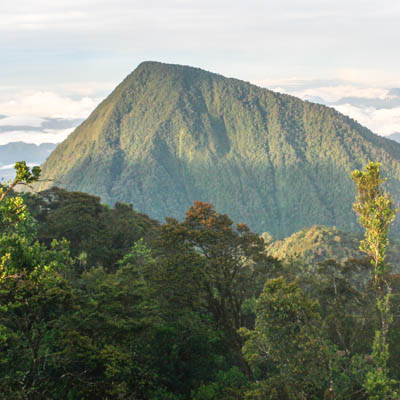 Responses to rising temperatures vary by latitude, but researchers fear there may be no clear winners among these strategies

A team of scientists from the University of British Columbia, the University of California, Santa Cruz, and the University of Miami published a new study in Ecology Letters showing how rising temperatures resulting from climate change are affecting where plants and animals can live in mountain regions around the globe.

The researchers found that tropical species are shifting their ranges up mountain slopes at a rate that’s 2.1 to 2.4 times faster than their temperate counterparts, and tropical forests, in particular, are undergoing these changes 10 times faster than temperate forests. These findings contribute new insight into how species survival outcomes—and potential conservation strategies—may vary by geography as our world warms.

Members of the research team each brought their own expertise in studying these types of changes within plant and animal communities. Lead author Benjamin Freeman, a postdoctoral fellow at the University of British Columbia, had documented the shifting ranges of birds and other animals in mountainous regions of the tropics. Meanwhile, coauthor Kai Zhu, a UC Santa Cruz assistant professor of environmental studies, had been researching the effects of climate change on North American forests. And coauthor Kenneth Feeley, and associate professor of biology at the University of Miami, had extensively studied the biogeography of tropical forests.

With help from UC Santa Cruz environmental studies graduate student and coauthor Yiluan Song, the team set out to combine their insights into a new global perspective.

Copyrights of the Climate News articles belong to the respective Media Channels.
This Climate News portal is non-profit and politically non-dependent forwarding readers to The Current Global Climate News